Rugby's Caldecott Park given the green light for award success

THE bandstand at Rugby's Caldecott Park has been lit up in green this week to celebrate its success in the Green Flag Awards.

The town's premier park retained the prestigious prize for the thirteenth year in a row, while Newbold's Centenary Park was awarded a Green Flag for a fifth year.

And Millennium Green, in Craven Road, and New Bilton's Gladstone Green both retained Green Flags for a fourth year, together with the grounds at Rainsbrook Crematorium. 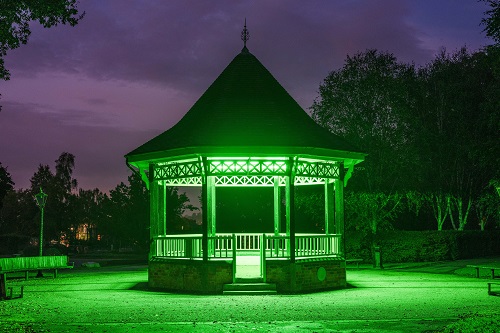 With the coronavirus pandemic putting paid to traditional award ceremonies, Green Flag has launched #GoGreenForParks - a campaign calling for parks and landmarks across the country to be lit up in green today (Wednesday 14 October) to celebrate the role green spaces play in communities and pay tribute to the staff and volunteers who keep our parks spick and span.

"We're proud of our track record of creating and maintaining quality parks and green spaces across the borough, giving our residents safe environments to exercise in, explore and enjoy," Cllr Roberts added.

"The important role our parks play has been brought into focus during the lockdown restrictions, and our success in the Green Flag Awards provides a fitting tribute to the hard work of our parks and grounds team, and volunteers and residents, who help maintain our green spaces all year round."

Allison Ogden-Newton OBE, chief executive of Keep Britain Tidy, said: "This year, more than ever, our parks and green spaces have been a lifeline, and we know millions of people have used them to relax, meet friends, exercise or simply escape for a short time.

"It is a testament to the incredible dedication and hard work of parks staff and volunteers that, despite the challenges that went along with record numbers of visitors, Rugby Borough Council has achieved the highest standards demanded by the Green Flag Award."