RUGBY struck silver at the Britain in Bloom Awards, bringing the curtain down on a glorious summer of horticultural success. 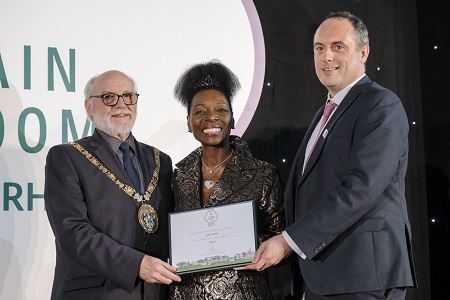 The Mayor of Rugby, Cllr Bill Lewis, received the award on behalf of the borough from the vice-president of the RHS, Baroness Floella Benjamin.

Derry was crowned the winner of the small city category, while Scottish town, Bridge of Earn, took top honours in the 'involving children and young people' category, for which Rugby also received a nomination.

Cllr Lewis said: "It was an honour to represent Rugby at the Britain in Bloom Awards and to receive a silver gilt was a remarkable achievement for the borough.

"This latest accolade caps a great year for Rugby in the In Bloom awards, and I'd like to thank the hard work of all the volunteers who, with the support of the council's parks and grounds team, helped make the borough blossom throughout the summer."

Rugby won gold in the small city category of the Heart of England In Bloom Awards for a 12th year in a row in September, also being crowned overall winner for the region for a second successive year.

The theme of the borough's entry was the Year of Green Action, with communities encouraged to support Rugby's In Bloom bid by embracing projects which enhanced the natural environment - from recycling and litter picking to tree planting and community edible gardens.

The Britain in Bloom judges said: "The overall impression of Rugby was of a strong community with voluntary groups, the wildlife trust, schools, businesses, Rugby First and the borough council all working in partnership in support of their 2019 Year of Green Action campaign."