AUTHOR Stephen Cooper visits the birthplace of the game on Saturday to reveal the fascinating story of the first Rugby World Cup.

The award-winning author's talk at the World Rugby Hall of Fame forms part of the Celebrate Rugby festival, a programme of entertainment and events to mark the Rugby World Cup in Japan. 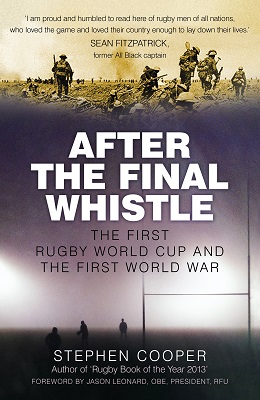 Cooper's book, After The Final Whistle - The First Rugby World Cup and the First World War, reveals how the Great War impacted on the game of rugby, with nearly 140 international players killed in action from 1914 to 1918.

But rugby's power to bring nations together led King George V to celebrate the end of the war by staging the King's Cup - the first tournament to bring together international teams representing Great Britain, New Zealand, Australia and South Africa in one place.

The tournament took place in Britain and featured military teams representing the Commonwealth countries and an RAF team comprising players from various nations.

King's Cup matches were staged in England, Scotland and Wales, with the final taking place on 19 April 2019 at Twickenham, where New Zealand beat Great Britain 9-3.

A World Cup in all but name, rugby fans were forced to wait nearly 70 years for the next global tournament, which took place in 1987 and saw New Zealand triumph once again.

Cooper, a winner of Rugby Book of the Year at the British Sports Book Awards, talks at the World Rugby Hall of Fame from 7pm.