Gardeners gather at the Benn Hall for Rugby in Bloom Awards

GREEN-fingered gardeners from across the borough gathered at the Benn Hall for the Rugby in Bloom Awards.

A host of residents, businesses, schools and community organisations entered this year's contest, with the Mayor of Rugby, Cllr Bill Lewis, presenting the awards at last Wednesday's (18 September) ceremony.

Awards were presented in a number of categories, including best allotment, best small garden and best organic vegetable plot. 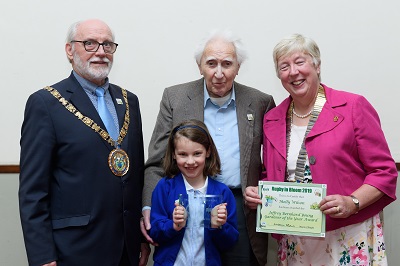 The Denbigh Arms, in Monks Kirby, was awarded first prize in the public houses, hotels and restaurants category, while Rugby Bodyshoppe took top honours in the industrial category.

Rimo Growers, in Dunchurch, walked away with the first prize in the garden centres and florist category, and Brinklow Village Store won the shops and offices category.

And Molly Wilson walked away with the Jeffrey Bernhard Young Gardener of the Year Award for her work at Leamington Hastings Academy's gardening club.

"This year's In Bloom attracted a bumper crop of entries and the high standard played a major part in Rugby's success at the Heart of England in Bloom Awards."

After enjoying another golden summer at the Heart of England in Bloom Awards, where the borough took gold in the small city category for a 12th year in a row and overall gold for the second year running, a delegation from Rugby heads to London next month for the Britain in Bloom award ceremony at the Royal Horticultural Society's Lindley Hall.

Photo caption: (back, left to right) The Mayor of Rugby, Cllr Bill Lewis, Jeffrey Bernhard, and Sue Maguire, president of the Rotary Club of Rugby, presented (front) Molly Wilson with the Jeffrey Bernhard Young Gardener of the Year Award.