THE Mayor of Rugby has sent a 'good luck' message to all the teams competing in the Rugby World Cup.

Cllr Bill Lewis has sent a card to all 20 nations battling to lift the Webb Ellis Cup in Japan, with the tournament kicking-off on Friday (20 September) when the host nation take on Russia in the capital's Tokyo Stadium. 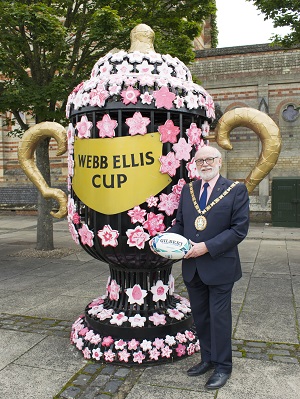 The 'good luck' card features a photograph of the statue outside Rugby School which celebrates the moment William Webb Ellis picked up the ball and ran with it during a game of football in 1823.

Inside, Cllr Lewis writes: "Best wishes for the Rugby World Cup - Japan 2019 from The Rugby Town, the birthplace of the game and home of the World Rugby Hall of Fame.

"Together, we celebrate the values of integrity, respect, solidarity, passion and discipline which bind the global rugby family."

A lifelong rugby fan, Cllr Lewis was born and raised in the rugby heartlands of Wales, playing for Neath Grammar School and while studying at University College Swansea.

He moved to the birthplace of the game 50 years ago and in 2015 was one of the many volunteers who supported Rugby's World Cup celebrations.

Cllr Lewis said: "The Rugby World Cup brings the world's greatest players together to perform on a global stage, and promises to showcase all the skills and talent which make rugby a truly global game.

"The tournament also promises to promote rugby's core values of integrity, passion, solidarity, discipline and respect, values which underpin the game and have a vital role to play in all our everyday lives."

Celebrate Rugby, a packed programme of entertainment, takes place in the birthplace of the game throughout the World Cup.

Featuring cinema, theatre, comedy and music, Celebrate Rugby also includes details on where to watch all the action from Japan - including the chance to watch the final at Rugby School's Macready Theatre on Saturday 2 November.