The result of the Warwickshire Police and Crime Commissioner election has now been declared.

Gold rush for Rugby at Heart of England in Bloom

RUGBY made it a dazzling dozen at the Heart of England in Bloom Awards, winning gold for a 12th year in a row.

And the town also walked away with the overall gold for the Heart of England region at the award ceremony at Dunchurch Park Hotel and Conference Centre - claiming the crown for a second year running.

Rugby declared 2019 to be the Year of Green Action, encouraging communities to support the borough's In Bloom entry by embracing projects which enhance the natural environment - from recycling and litter picking to tree planting and community edible gardens. 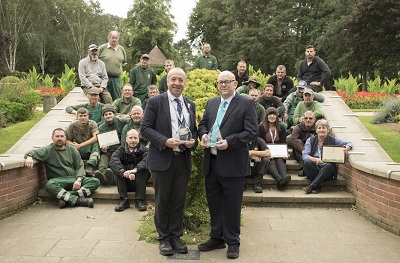 Judges were taken on a tour of Rugby in July, visiting the town's premier parks, including Caldecott Park and Centenary Park, and the floral displays in the town centre.

The tour also included a stop at Ashlawn Cutting on the Great Central Way, where judges met volunteers from Warwickshire Wildlife Trust, and visits to Brownsover Community School, Rainsbrook Crematorium and Rugby School.

The judges praised Rugby for reflecting the core values of In Bloom, adding: "The continued level of engagement across Rugby's diverse community, both young and old, is outstanding."

Cllr Howard Roberts, Rugby Borough Council portfolio holder for environment and public realm, said: "Our success in the In Bloom awards relies on the support of the whole community and we were delighted the judges paid tribute to both the number and diversity of the organisations which take part.

"All the hard work by volunteers, businesses and schools, together with the council's parks team, has been rewarded and we can now look forward to next month's Britain in Bloom award ceremony in London."

The Britain in Bloom awards take place at the Royal Horticultural Society's Lindley Hall on 25 October.