JAPANESE culture takes centre stage in the birthplace of the game when Rugby kicks-off its World Cup celebrations.

Rugby Borough Council has teamed up with Rugby First, Rugby School and town centre businesses to organise Celebrate Rugby, a packed programme of entertainment inspired by the World Cup and its host nation, Japan.

Celebrate Rugby features cinema, theatre, comedy and music, while rugby fans can watch all the action from Japan at a range of venues - including the final at Rugby School's Macready Theatre, complete with the chance to kick a conversion on The Close, where the game was born. 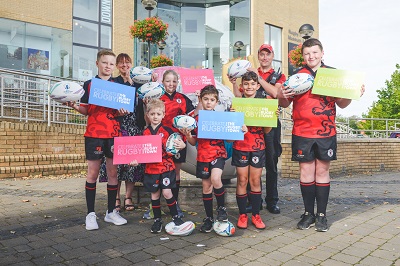 Rugby World Cup 2019 kicks-off in Tokyo on Friday 20 September when Japan take on Russia in the opening match.

But the World Cup celebrations start in the birthplace of the game on 18 September, when the Merchants Inn hosts its first World Cup Wednesday with a screening of England's triumph over Australia in the 2003 final.

The Merchants Inn, winner of the best pub in Britain to watch rugby in both 2018 and 2019, also holds a Sunday Movie Night throughout the tournament, showing Japanese-themed films such as The Karate Kid and The Last Samurai.

celerRugby Food and Drink Festival returns on Saturday 28 September, with its traditional menu of mouth-watering treats supported by a selection of Japanese delicacies.

Author Stephen Cooper visits the World Rugby Hall of Fame on Saturday 5 October to talk about his book, After The Final Whistle, which tells the story of the first Rugby World Cup in 1919.

Rugby Art Gallery and Museum hosts its own Mini-Matsuri festival on 5 October, where visitors can try out traditional Japanese art and crafts such as origami and furoshiki, while the venue also hosts daily screenings of The Gain Line, a film installation by Ravi Deepres which explores the game of rugby from a range of perspectives.

And Rugby Lions Minis Rugby Festival brings young teams together from across Coventry, Warwickshire and Northamptonshire to compete at Webb Ellis Road on 5 October.

In addition to the entertainment programme, Celebrate Rugby includes World Cup-inspired decorations in the town centre and displays in shop windows honouring the 20 teams competing in the tournament.

Rich Warren, Rugby First's operations manager, said shops and businesses in the town centre had welcomed the opportunity to take part in the World Cup celebrations.

He added: "We want to bring a special atmosphere to the town during the Rugby World Cup and encourage both residents and visitors to enjoy all the town centre has to offer during the tournament."

The Rugby World Cup takes place over seven weeks, with the final kicking off at Yokohama's International Stadium at 9am GMT on Saturday 2 November.

And after the winning team has lifted the Webb Ellis Cup, Rugby Round Table rounds off Celebrate Rugby on the evening of the final with a Japanese-themed firework display at Whinfield Recreation Ground.

Cllr Jill Simpson-Vince, Rugby Borough Council portfolio holder for growth and investment, said: "Our historic status as the birthplace of the game and home of the World Rugby Hall of Fame puts the town in the global spotlight during the World Cup, so I'm delighted the town has come together to organise a real celebration of both the game and Japan, the host nation.

"Celebrate Rugby runs throughout the tournament and supports town centre businesses in making the most of the opportunities the World Cup brings."

Amanda Hunter, Rugby School's head of marketing and communications, said: "It's great to be involved in the town's World Cup celebrations and we hope people will take up the unique opportunity to watch the live final at the School where the game was created."

Kevin McLoughlin, Rugby Round Table's fireworks event manager, said: "The Round Table has held its annual fireworks display since 1954, raising thousands of pounds for good causes in and around Rugby.

"We're delighted to stage a Rugby World Cup-themed display this year as the finale to Celebrate Rugby."

Full details of the Celebrate Rugby programme can be found on The Rugby Town website: www.therugbytown.co.uk/celebraterugby