A FILM projector built at the British Thomson-Houston (BTH) works in the 1950s has gone on display at Rugby Art Gallery and Museum.

The 451 was billed as "the finest 16mm magnetic-optical projector in the world" by BTH when it was launched in 1955.

It was the latest pioneering projector manufactured at the firm's Leicester Road works, which produced the world's first film projector of its kind in 1931. 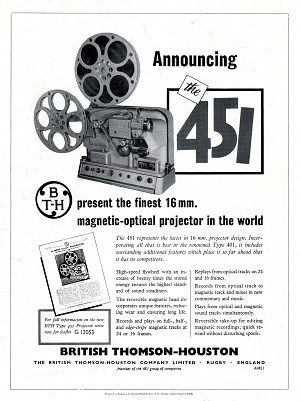 The 451 was capable of both playing and editing film, and allowed users to lay soundtracks over existing film footage.

BTH's advertising for the projector, the follow-up to the firm's 401 model, boasted: "Incorporating all that is best in the renowned Type 401, it includes outstanding additional features which place it so far ahead that it has no competitors."

The projector has been donated to Rugby Art Gallery and Museum's social history collection by the East Anglian Film Archive, and has gone on display at the museum until 7 September.

Cllr Jill Simpson-Vince, Rugby Borough Council portfolio holder for growth and investment, said: "The donation of the projector is a fantastic addition to the town's BTH collection and further demonstrates how the firm's expertise and innovation had a major impact both nationally and globally."