A FLOWER Power campaign has been launched to propel Rugby to glory in this year's Britain in Bloom contest.

Rugby Borough Council has joined forces with Rimo Growers in Thurlaston to launch the campaign, which encourages Rugbeians to 'spread the love' during the summer by thanking residents whose gardens raise a smile. 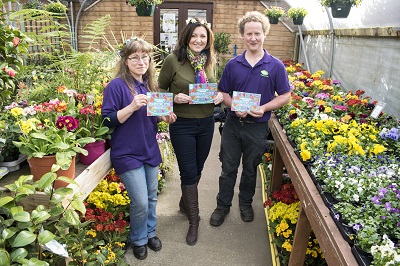 Flower Power postcards can be picked up from the Town Hall, Rimo Growers, Rugby Art Gallery and Museum, and Gloria and Lil's at the Tool Shed Cafe in Caldecott Park.

Residents can then pop a postcard through the letterbox of a gardener whose green-fingered handiwork deserves a seed of gratitude.

Gardeners who receive a Flower Power postcard can return it to the council and be entered into a prize draw, with a chance to win vouchers to spend at Rimo Growers.

Flower Power supports the town's entry in this year's Britain in Bloom contest. Rugby secured a place in the national finals after winning overall gold at the 2018 Heart of England in Bloom Awards.

The council has declared 2019 to be the Year of Green Action for its Rugby in Bloom theme, encouraging residents to 'go green' and support the environment - from creating community edible gardens to carrying out a litter pick.

Residents, businesses, schools and community organisations can all enter Rugby in Bloom, with a wide range of categories catering for gardeners of all ages and abilities.

Cllr Lisa Parker, Rugby Borough Council portfolio holder for environment and public realm, said: "The Flower Power campaign aims to make it a summer of love in Rugby, giving residents a chance to show appreciation for the efforts of the hundreds of gardeners who help make the borough bloom every year.

"We're looking forward to the town being in the national spotlight for this year's Britain in Bloom and urge everyone to spring into our Year of Green Action and support both our environment and the borough's In Bloom entry."

Rugby competes with Bury, Derry, Harrogate, Kirkaldy and Loughborough in the small city category of Britain in Bloom.

Judging for the contest takes place in July with the winners announced at a ceremony in the autumn.