A NEW exhibition at Rugby Art Gallery and Museum explores the history of the town's schools and colleges.

Educating Rugby opens on Saturday 26 January and features a treasure trove of pieces from the Museum's social history collection.

Before the Elementary Education Acts of 1876 and 1880, which made it compulsory for children to attend school, teaching was mainly offered in monasteries, convents, ladies seminaries and dame schools. 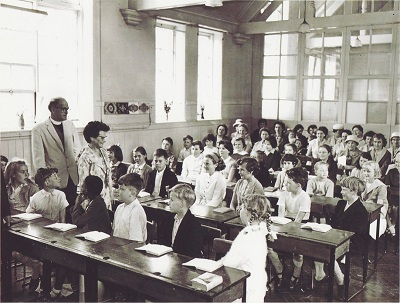 Rugby had just three traditional schools before the landmark education Acts came into force - Lawrence Sheriff's School, located at its Clifton Road site since 1748, The Free Grammar School, now Rugby School and established in 1567, and Richard Elborow's School, which was established between High Street and Sheep Street in 1707 and catered for just 30 pupils.

But from the 1870s, and with the number of children in Rugby boosted by the boom in the town's railway and manufacturing industries, demand for school places surged and led to the foundation of many schools which still teach pupils today.

Other objects on display include school reports, exercise books and newsletters, including copies of Lawrence Sheriff School's The Griffin, The Matthewian and The Dunsmorian.

Photo caption: A lesson at County Junior School, in Chapel Street, in 1961, shortly before the school closed its doors.