SIR Clive Woodward visits the World Rugby Hall of Fame in the spring.

Tickets for An Evening of Rugby with Sir Clive Woodward OBE go on sale later this week - with Hall of Fame Annual Entry Pass holders qualifying for priority booking.

Sir Clive, the mastermind behind England's Rugby World Cup triumph in 2003, visits the birthplace of the game on Thursday 14 March.

The exclusive event includes an interview with the former England international and coach, followed by a question and answer session with the audience, and a signing session. 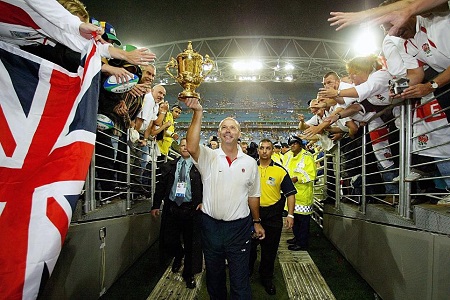 Woodward won 21 caps at centre for England and coached the national team for seven years, plotting the path to World Cup glory when Jonny Wilkinson's drop goal gave England a dramatic, last minute win over Australia in the final.

Inducted into the World Rugby Hall of Fame in 2011, Woodward now works as a television pundit, journalist, business coach and mentor, sharing his wealth of knowledge gained through a life in rugby.

Tickets for An Evening of Rugby with Sir Clive Woodward OBE cost £40 and include canapés and a free drink on arrival.

Sir Clive receives no fee from the event, with proceeds going to the Hall of Fame's education programme.

World Rugby Hall of Fame Annual Entry Pass holders can buy tickets for the event from 10am on Friday (18 January) and receive a 15 per cent discount (offer limited to a pair of tickets per pass).

Tickets then go on general sale to the public from 10am on Monday (21 January).

Tickets can be booked online at www.therugbytown.co.uk/eveningofrugby or at Rugby Visitor Centre on (01788) 533217.

A limited number of tickets for the event have been reserved for World Rugby Hall of Fame Corporate Pass holders. Email visitor.centre@rugby.gov.uk for more details.

Cllr Michael Stokes, leader of Rugby Borough Council, said: "Working with World Rugby, we have organised a busy programme of events at the Hall of Fame leading up to this year's Rugby World Cup in Japan and we're delighted to welcome a guest of Sir Clive's calibre to kick-off the year."

Sir Clive said: "The World Rugby Hall of Fame acknowledges the greatest of all time in rugby and to be part of the esteemed list of inductees is an absolute honour and privilege for me.

"I look forward to visiting Rugby and taking part in the first of a number of events that are planned at the World Rugby Hall of Fame to celebrate the game we all know so well and love.”

The Hall of Fame, a partnership between Rugby Borough Council, World Rugby and Tudor, celebrates the legends, the history and the spirit of the game through state-of-the-art HD touchscreen technology.

Also housing historic rugby memorabilia, the attraction has brought thousands of visitors and a host of Hall of Fame inductees to the place where the game began.

For more information about the Hall of Fame, the Annual Entry Pass and Corporate Pass, visit www.therugbytown.co.uk/halloffame