Council rides off with national award for new horse path

The council created the one-and-a-half kilometre permissible route for riders with the support of a £1,000 grant from the British Horse Society's Paths for Communities Fund. 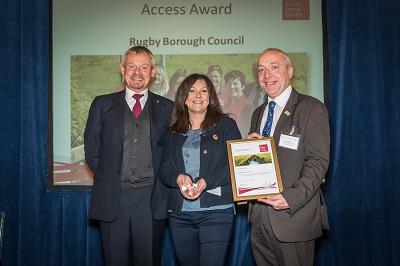 The path, which gives equestrians safe, easy access to off-road riding, was officially opened in May.

And at the British Horse Society Awards on Friday (23 November) at London's Saddlers' Hall, the council was presented with the Access Award for excellence in delivering enhanced equestrian access.

Cllr Lisa Parker, Rugby Borough Council portfolio holder for environment and public realm, attended the ceremony and was presented with the award by actor Martin Clunes, president of the British Horse Society.

"The council planted Diamond Wood to create a natural woodland habitat for the whole community to enjoy," Cllr Parker said.

"We were keen to include horse riders in our plans for the wood and, working closely with the British Horse Society, we have delivered a safe, accessible path for riders to enjoy."

Diamond Wood was planted in the Rainsbrook Valley in 2012 to mark the Queen's Diamond Jubilee.

The wood was one of only 60 nationwide to be chosen for the Woodland Trust's flagship Jubilee Woods project and was supported by grants from the Forestry Commission worth nearly £300,000.

Horse riders can access the permissible riding route via a specially-constructed, horse-friendly gate in Onley Lane.