Japanese media visit the birthplace of the game

JOURNALISTS from Japan visited the World Rugby Hall of Fame this week during a tour of the birthplace of the game.

The press pack visited Rugby during a whistle-stop trip to England organised by World Rugby ahead of next year's Rugby World Cup in Japan. 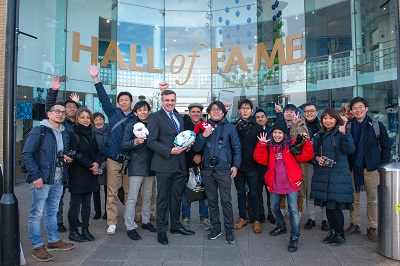 After watching the 'Brave Blossoms' run England close in Saturday's (17 November) test match at Twickenham, the journalists travelled to Ashton Gate the following day to catch Bristol's dramatic Premiership clash with league leaders Exeter before heading to Rugby on Monday.

The tour of the town included visits to the William Webb Ellis statue and the Webb Ellis Rugby Football Museum, and a guided tour of Rugby School, where the journalists interviewed pupils and walked on The Close.

The trip was rounded off with a visit to the World Rugby Hall of Fame, where Cllr Michael Stokes, leader of Rugby Borough Council, greeted the journalists and gave a number of interviews.

Cllr Stokes, who forged links with the Rugby World Cup 2019 Organising Committee during a visit to Kyoto last year, said: "After speaking with journalists from many of Japan's largest media organisations, it's clear hosting next year's Rugby World Cup has captured the imagination of the whole country, with great interest in the history and origins of the game.

"During meetings with Akira Shimazu, the president and chief executive officer of the Rugby World Cup 2019 Organising Committee, we discussed promoting the World Rugby Hall of Fame and the birthplace of the game at host cities and fan zones during the World Cup, and Monday's press visit supports our aim of raising Rugby's profile in Japan ahead of the tournament."

Bill Beaumont, chair of World Rugby, said: "With Japan the place to be for rugby fans next year, it was great to welcome a group of Japanese media to the World Rugby Hall of Fame in Rugby town to immerse themselves in the sport's rich history.

"Fans can follow in their footsteps and visit the Hall of Fame to learn about the Rugby World Cup and feel the excitement ahead of Asia's first tournament."

For more information on the World Rugby Hall of Fame, a partnership between Rugby Borough Council, World Rugby and Tudor, visit www.therugbytown.co.uk/halloffame