Hospital staff receive a Simple Thank You from the Mayor

THE Mayor of Rugby was taken on a tour of the Hospital of St Cross when he visited staff to present a Simple Thank You.

Cllr Tom Mahoney launched his Simple Thank You campaign at the start of his Mayoral year to highlight the work of individuals and organisations who serve Rugby's communities. 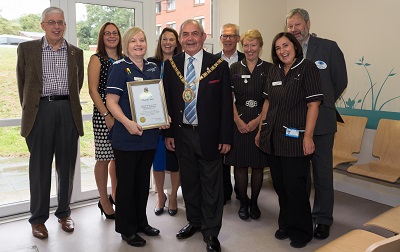 He visited St Cross to present certificates to staff who work in the hospital's outpatients department and the £400,000 Friends Blood Taking Unit, which opened in 2015 with the help of a £140,000 donation from the Friends of the Hospital of St Cross.

Cllr Mahoney presented the Friends with a Simple Thank You at the charity's annual general meeting earlier this year, and trustees of the charity joined him on his tour of the hospital.

During the visit, Cllr Mahoney met volunteers from the Friends who run the St Cross tea bar, organise the charity's book sales and help visitors navigate the hospital.

He toured a number of departments, including the cardiac rehabilitation unit, the urgent care centre and the soon-to-be opened sleep studies unit, which has benefited from an £80,000 donation from the Friends and funding from the Rugby Group Benevolent Fund.

And Cllr Mahoney was welcomed to the hospital by Lisa Kelly, chief operating officer of University Hospitals Coventry and Warwickshire (UHCW) NHS Trust, who outlined the trust's commitment to St Cross and its plans for the hospital's future.

He ended his tour with a visit to the Rugby Hospital Radio studio, where he was interviewed by the station's chairman, Mike O'Connor.

Cllr Mahoney, a former army medic when he served with the Queen's Own Hussars, said: "My Simple Thank You campaign celebrates the theme of my Mayoral year, service.

"The staff of the NHS embody the idea of service, dedicating themselves to a demanding profession and delivering the highest standards of care while often working under considerable pressure.

"I was delighted to meet so many of the team at St Cross during my visit, including volunteers from the Friends, who do so much to support both the frontline staff and the hospital as a whole.

"After hearing so much about the Friends' work, it was great to see the fruits of the charity's fund-raising and see for myself the wide range of health services available at our hospital."

The Friends of the Hospital of St Cross formed in 1955 and support the hospital by running a range of voluntary services and donating equipment to improve the patient experience. 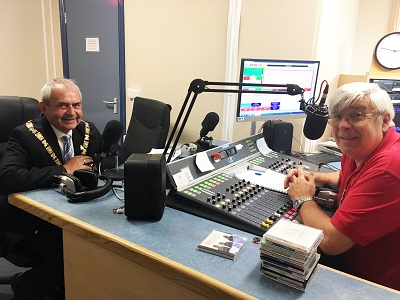 Willy Goldschmidt, chairman of the Friends, said: "The Rugby community reflects their passion for the hospital in the support they give to the Friends by fund-raising and volunteering.

"This support has allowed us to buy new equipment for the hospital and help UHCW NHS Trust develop new services at St Cross.

"The Mayor had thanked the Friends for all of this at our annual general meeting and it was a real pleasure to show him what we do at first hand."

"It was a pleasure to show the Mayor around the services on site and hear him say a personal thank you to our staff. People are often surprised at the range of services that we are now able to offer at the hospital."