Songs celebrating the unsung heroes of the First World War

SINGER-songwriter Louise Jordan celebrates the inspirational stories of heroic women who played a part in the First World War effort at a performance later this month at Rugby Art Gallery and Museum.

No Petticoats Here combines songs, anecdotes and photographs to tell stories of extraordinary women who lived through the Great War, from a physicist who invented a fan to clear poisonous gas from the trenches to keen motorcyclists who signed up to serve with Dr Munro's Flying Ambulance Corps. 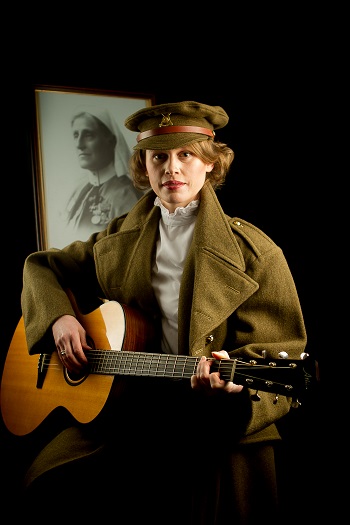 The inspiration for No Petticoats Here came from Louise's discovery of the story of Dorothy Lawrence, whose determination to become an investigative journalist led her to risk her life on the frontline in France.

Cycling through France to the Somme, Dorothy donned a soldier's uniform and managed to enter the trenches just 400 yards from the enemy before illness eventually forced her to turn herself in.

Dorothy's story led Louise to carry out extensive research on a host of heroic women, work which took her to the battlefields of Flanders and the Somme, and trips to dozens of museums and libraries.

Songs inspired by her research include Queen Of Spies, about French woman Louise de Bettignies, who turned British agent after the Germans took control of her home town of Lille, and Endless Days, which tells the tale of motorcycle fanatics Elsie Knocker and Mairi Chisholm, who joined Dr Munro's Flying Ambulance Corps and ran a first aid post in the bombed out Belgian village of Pervyse.

Louise, who secured funding from Arts Council England to develop the project, performs No Petticoats Here at Rugby Art Gallery and Museum on Sunday 14 October.

The performance starts at 6pm and tickets, priced £5, can be bought at Rugby Visitor Centre or online at www.ragm.co.uk/petticoats

Cllr Sebastian Lowe, Rugby Borough Council portfolio holder for growth and investment, said: "Rugby Art Gallery and Museum staged an exhibition in 2016 exploring the life of Lady Dorothy Feilding, the daughter of the Earl of Denbigh who left the family home near Rugby to work as an ambulance driver near the frontline in Flanders.

"Lady Dorothy was one of many women who bravely supported the war effort, and No Petticoats Here celebrates stories of heroism which remain an inspiration to this day."

For more information about events and exhibitions at Rugby Art Gallery and Museum, visit www.ragm.co.uk