Rugby strikes gold at Heart of England in Bloom

RUGBY has secured a place at next year's national Britain in Bloom final after striking double gold at the Heart of England in Bloom Awards.

The town picked up gold in the small city category for the eleventh year in a row before being crowned overall winner for the Heart of England region - a gold which puts Rugby in the running for Britain in Bloom glory. 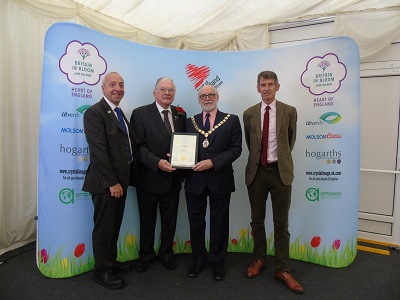 Representatives from villages, towns and cities from across the Midlands and the east of England gathered at Burton-on-Trent's National Brewery Centre earlier this month for the Heart of England in Bloom Awards ceremony.

Rugby's entry commemorated the centenary of the end of the First World War, with judges touring the town in July to inspect the town's floral displays and horticultural highlights.

During the tour, judges visited Ashlawn Cutting and met volunteers who help preserve the nature reserve, and were welcomed to Brownsover Community School by pupils who embraced the end of The Great War theme by planting poppies in the school grounds and making soldier and nurse uniforms.

Karen Crane, a teacher at the school, was singled out for praise by the judges and was honoured with an Outstanding Merit Award at the ceremony.

The judges also visited the town's premier parks, including Caldecott Park and Centenary Park, and toured the grounds of Rainsbrook Cemetery and Crematorium.

Cllr Lisa Parker, Rugby Borough Council portfolio holder for environment and public realm, said: "Rugby has a remarkable record in the Heart of England in Bloom contest and we're delighted to win an eleventh gold award in a row and take the title of overall winner.

"In Bloom inspires the whole community, bringing together businesses which sponsor floral displays, volunteers, schools, residents and community organisations who all support our entry.

"Together with the council's parks and grounds team, it's a real team effort and I'm sure we'll rise to the challenge once again next year for the national Britain in Bloom contest."

Residents, businesses and schools who entered this year's Rugby in Bloom contest were presented with prizes earlier this month during award ceremonies at the Benn Hall.

The Mayor of Rugby, Cllr Tom Mahoney, presented the awards at the Rugby in Bloom School Awards, where 17 nurseries, infant schools and primary schools picked up prizes.

Cllr Mahoney was also on hand to present the awards at the main Rugby in Bloom ceremony, where prizes were presented to residents, businesses and community organisations across a host of categories, including best allotment, best front garden and best commemoration of the contest's First World War centenary theme, which was won by St Boltolph's Church in Newbold.

A full list of Rugby in Bloom winners has been published on the council's website at www.rugby.gov.uk/rugbyinbloom