FIVE of the borough's parks and green spaces have received Green Flag Awards - with Caldecott Park securing the prestigious prize for the eleventh year in a row.

The West Midlands winners of the 2018 Green Flag Awards were announced during a ceremony at Walsall Town Hall, with Newbold's Centenary Park retaining its Green Flag for a third year. 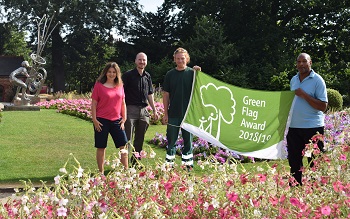 Millennium Green, in Craven Road, and New Bilton's Gladstone Green both retained Green Flags after securing the status for the first time in 2017.

And the grounds of Rainsbrook Crematorium also won a Green Flag following its first success a year ago.

Cllr Lisa Parker, Rugby Borough Council portfolio holder for environment and public realm, said: "The Green Flag Awards set a high benchmark for parks and green spaces, and we're delighted to have retained all five of our flags in 2018.

"The council's parks team works hard all year round, but volunteers and residents also play a vital role in helping us keep our parks and green spaces places we can all enjoy."

"Each flag honours the thousands of staff and volunteers who work tirelessly to maintain the high standards demanded by the Green Flag Award.

"We're proud to have so many wonderful green spaces in the UK for people to enjoy and hope next year we award even more flags."