THE Mayor of Rugby invited members of Blind Veterans UK to a reception in the Mayor's Parlour. 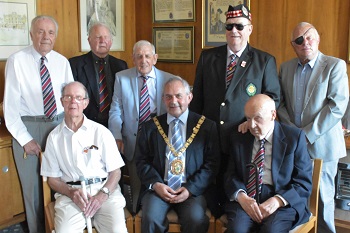 Blind Veterans UK was founded in 1915 and was originally known as the Blinded Soldiers' and Sailors' Care Committee.

It became St Dunstan's in 1923 before changing its name to Blind Veterans UK six years ago to raise public awareness of the charity's work supporting vision-impaired ex-servicemen and servicewomen.

Cllr Mahoney, who served in the Queen's Own Hussars cavalry regiment, has made 'service' the theme of his Mayoral year and said he was delighted to meet members of Blind Veterans UK.

"I have chosen to support the Soldiers, Sailors, Airmen and Families Association (SSAFA) during my Mayoral year as, having served in the armed forces, I appreciate only too well the vital support charities such as SSAFA and Blind Veterans UK offer our ex-servicemen and servicewomen," Cllr Mahoney added.

"It was a pleasure to welcome members of the charity to the parlour and find out more about the charity's work."

Jennie Hammond, community team leader at Blind Veterans UK, said: "We're delighted that Cllr Tom Mahoney has chosen 'service' as the theme for his year in office and that, as an ex-serviceman, he has shown such a keen interest in veterans' issues.

"Our blind veterans were delighted to meet with him to discuss the support on offer to vision-impaired ex-service men and women in the local community and we look forward to working closely together in the future."