ITALIAN classics and the best of British rub shoulders on the menu at Maia Cafe, the new eatery at Rugby Art Gallery and Museum. 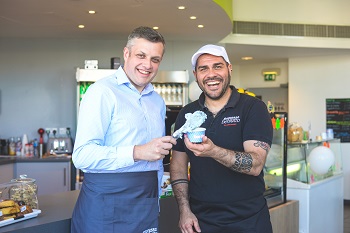 The cafe's menu features Italian classics such as paninis, bruschetta, focaccia, lasagne and gelato, together with traditional British fare, including sandwiches, jacket potatoes and tea cakes.

Marcello said the success of Maia Gelato - which serves the traditional Italian ice cream - inspired the decision to expand the Maia brand at Rugby Art Gallery and Museum.

"We believed we could bring a unique experience to the Art Gallery and Museum which would enhance the aesthetic and atmosphere," Marcello said.

"We want to give visitors, tourists and the Rugby community a very nice and different experience to enjoy."

"I'm delighted Antonio and Marcello have chosen to expand a local business by working with the council to launch the new cafe," Cllr Stokes said.