THE Mayor of Rugby joined a host of dignitaries at St Andrew's Church on Sunday for the annual civic service. 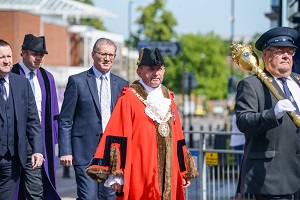 Civic Sunday traditionally welcomes Rugby's new Mayor to the role and recognises the part councillors and council officers play in the life of the borough.

The Mayor of Rugby, Cllr Tom Mahoney, joined Mark Pawsey, MP for Rugby, Freemen of the Borough, former Mayors and councillors in a procession from the Town Hall to St Andrew's Church for the civic service, which was led by the Rector of Rugby, the Reverend Imogen Nay.

The theme of Civic Sunday - 'service' - was chosen by Cllr Mahoney to pay tribute to those who serve the borough's communities.

The service included a reading of Rudyard Kipling's poem, If, by Fiona Palmer, of Coventry and Warwickshire Mind - one of the Mayor's chosen charities for his year in office.

The chosen passage from the Bible - Jesus washes the feet of his disciples - was read by retired teacher Rosemary Mahon, one of Cllr Mahoney's former teachers at Bishop Wulstan School.

And in addition to traditional hymns such as Jerusalem and I Vow To Thee, My Country, the service included a performance by The Invisible Friends Choir, who sung This Is Me, from the film, The Greatest Showman. 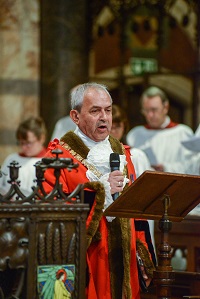 The Derby-based choir raises awareness of 'invisible' disabilities such as chronic pain, depression or ME.

Cllr Mahoney said: "I have chosen 'service' as the theme for my Mayoral year to celebrate the work of individuals and organisations who selflessly serve our communities, often without recognition.

"Civic Sunday reaffirms the commitment councillors have made to serve Rugby and its communities, and as the borough's first citizen I was delighted to welcome a packed congregation to St Andrew's Church."

Photo captions: (top) The Mayor of Rugby, Cllr Tom Mahoney, led the procession from the Town Hall to St Andrew's Church for the Civic Sunday service.

(bottom) During the service, Cllr Mahoney led the congregation through a reading of the Act of Commitment.