THE Armed Forces Day flag was raised at the Town Hall today (Monday 25 June) to pledge the borough's support for the British Army, Royal Navy and Royal Air Force. 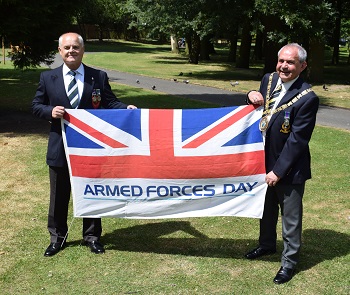 The flag was raised at civic buildings and famous landmarks across the country at the beginning of a week of celebrations ahead of Armed Forces Day itself - Saturday 30 June.

Armed Forces Day celebrates its tenth anniversary this year and encourages communities to show support for the work of the servicemen and servicewomen who serve the country at home and abroad, and recognise the contributions of veterans, service families, reservists and cadets.

The ceremony at the Town Hall was attended by representatives from a number of armed forces organisations, including the Rugby and District branch of the Royal Air Force Association, the 89 (Warwickshire) Signal Squadron Association and the Royal British Legion.

During the ceremony, Major Sean Phillips, of the 4th Battalion of the Parachute Regiment based at Rugby's Army Reserve Centre, gave the command to lower the Armed Forces Day flag and observe a minute's silence in memory of those who have fallen in battle.

Cllr Mahoney, who served with the Queen's Own Hussars cavalry regiment, said: "Our armed forces serve our country around the world, all year round, and Armed Forces Day gives us the opportunity to show our support for the brave, selfless work our servicemen and servicewomen undertake to keep us safe and protect our national interests. 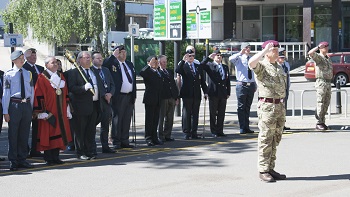 (bottom) A minute's silence was held during the ceremony at the Town Hall to remember those who have fallen in battle.