CHILDREN can explore the World Rugby Hall of Fame for free during the school summer holidays. 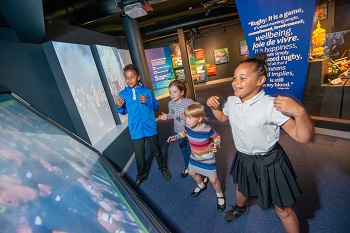 The visitor attraction launches a 'children go free' promotion throughout July and August, allowing up to four under 17-year-olds to enjoy free admission to the Hall of Fame when accompanied by an adult who has paid the £6 entry fee.

The Hall of Fame, a partnership between Rugby Borough Council and World Rugby, opened in November 2016 and has welcomed thousands of visitors through its doors.

The state-of-the-art attraction uses the latest HD touchscreen technology to reveal the history of the sport and celebrate the legends of the game who have been inducted into the World Rugby Hall of Fame.

A host of inductees have visited Rugby since the Hall of Fame opened its doors, including England World Cup winners Martin Johnson and Jonny Wilkinson, while visitors from around the world have made the pilgrimage to the birthplace of the game to explore the attraction.

Cllr Sebastian Lowe, Rugby Borough Council portfolio holder for growth and investment, said: "Our partnership with World Rugby has enhanced Rugby's status as the birthplace of the game and delivered a boost to tourism.

"The Hall of Fame not only celebrates rugby's history and legends, but also aims to inspire the next generation of players, so I'm delighted we can offer free admission to children during the school summer holidays."

The World Rugby Hall of Fame also holds a free admission day for all on Sunday 8 July as part of the Rugby Festival of Culture.

For more information about the Hall of Fame, and to book tickets online, visit www.therugbytown.co.uk/halloffame