A CONVERSATION on Twitter during the Rugby World Cup led a couple from America to make the pilgrimage to the birthplace of the game. 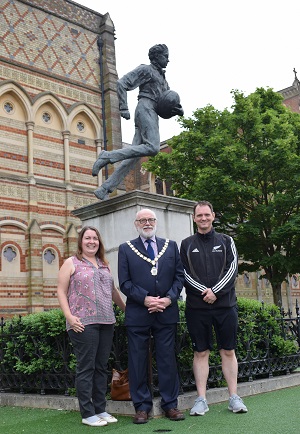 Sharing a passion for the game, Cllr Lewis issued an open invitation to Florida-based Jennie and her husband, Craig, to visit the birthplace of the game and take a tour of the World Rugby Hall of Fame and Rugby School.

And on Saturday (9 June), Cllr Lewis met Jennie and Craig, who visited Rugby during a whistle-stop visit to the United Kingdom.

After visiting the Hall of Fame, the couple were treated to a 'behind the scenes' tour of Rugby School, including the chance to visit The Close, where William Webb Ellis invented the game.

Cllr Lewis then took the Jennie and Craig for lunch at The Merchants Inn where, in keeping with the day's rugby theme, the test match between South Africa and England was being shown on a big screen.

Jennie, a clinical researcher, runs Positively Rugby in her spare time, a project which aims to promote the game's values through business, charitable events and coaching.

She has also started work on a book, compiling inspirational and motivational stories from the world of rugby, in which she hopes to include a story from the birthplace of the game.

Jennie said: "We had an incredible day in Rugby and found both the World Rugby Hall of Fame and Webb Ellis Rugby Football Museum fun and educational.

"We'll spread the word about what a fantastic place Rugby is to visit."

Cllr Lewis added: "It was a pleasure to welcome Jennie and Craig to Rugby.

"The town holds a special place in the hearts of rugby fans across the world and it was clear both Jennie and Craig, who originally hails from New Zealand, were delighted to visit and explore Rugby's rich history.

"I'd like to thank Rugby School for extending a warm welcome to the couple, which included a visit to The Close, the place where the game began."

For more information about the World Rugby Hall of Fame, visit www.therugbytown.co.uk/halloffame

Photo caption: Cllr Bill Lewis, Deputy Mayor of Rugby, took Jennie and Craig Reid on a tour of the birthplace of the game, including a visit to the William Webb Ellis statue.