Mayor delivers a Simple Thank You to firefighters

THE Mayor of Rugby has visited the town's fire station to deliver a 'thank you' to firefighters. 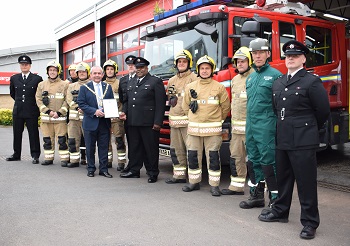 Cllr Tom Mahoney visited the station in Corporation Street as part of his Simple Thank You campaign, which highlights the work of individuals and organisations who serve Rugby's communities.

During his visit, Cllr Mahoney was taken on a tour of the station by Cecil Benjamin, Warwickshire Fire and Rescue Service's station commander for Rugby, Southam and Fenny Compton.

The tour included the launch of Warwickshire's new Specialist Large Animal Rescue Unit, a custom-built vehicle which was designed by firefighters based at Rugby Fire Station.

And just days after Cllr Mahoney's visit, the unit raced to the rescue of a horse which had become trapped in a ditch in the village of Curdworth.

After presenting a Simple Thank You certificate to SC Commander Benjamin and the watch, Cllr Mahoney said: "Warwickshire Fire and Rescue Service not only fights fires, but also rescues motorists trapped in vehicles, carries out fire safety inspections of premises and offers fire safety advice to residents.

"Rugby Fire Station also has small boats to rescue people who get into difficulty on Warwickshire's waterways and, as I discovered during my visit, a new vehicle to help rescue large animals.

"The fire station also has a community room, where a number of organisations offer support to vulnerable residents.

"I was delighted to deliver a 'thank you' on behalf of the borough and find out more about the team at Rugby Fire Station's work."