COUNCILLOR Tom Mahoney has become the new Mayor of Rugby. 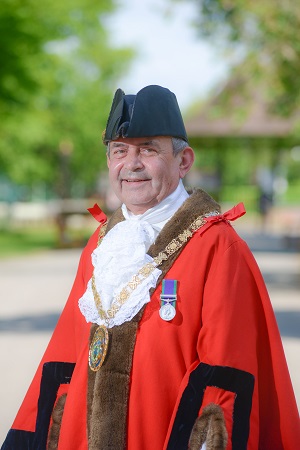 Cllr Mahoney moved to Rugby with his family when he was six-years-old and has represented the Benn Ward on the borough council for a decade.

He followed in his father's footsteps by joining the British Army and served with the Queen's Own Hussars cavalry regiment before returning to Rugby.

Cllr Mahoney has chosen 'service' as the theme of his year in office, celebrating the often unsung heroes whose work in the community make the borough a better place to live.

To support his theme, Cllr Mahoney has launched his Simple Thank You campaign to highlight the work of individuals and organisations who serve Rugby's communities.

He plans to visit a number of organisations throughout his Mayoral year to award a Simple Thank You certificate and find out first-hand about the work carried out on behalf of the borough.

Cllr Mahoney has chosen to support the Soldiers, Sailors, Airmen and Families Association (SSAFA) and Coventry and Warwickshire Mind during his year in office.

SSAFA, founded in 1885, supports both serving members of the armed forces and veterans through a worldwide network of volunteers.

Mind was founded in 1946 and works to empower people experiencing a mental health problem. Coventry and Warwickshire Mind, affiliated to the national charity, develops and delivers support services.

Cllr Mahoney said: "I am honoured to serve as Rugby's first citizen and am delighted to make 'service' the theme of my Mayoral year.

"Service can take many forms in our society and so many of those who dedicate time and effort to support others do so without seeking recognition.

"However, such service makes Rugby a better place to live, work and visit and I am looking forward during my year in office to delivering a simple 'thank you' to individuals and organisations who serve our community."

For more information on Coventry and Warwickshire Mind, visit www.cwmind.org.uk