RUGBY Art Gallery and Museum digs into the town's rural history in a new exhibition. 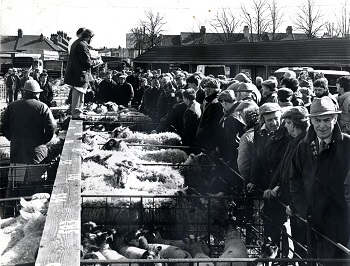 Rural Rugby explores the town's historic role at the heart of Warwickshire's agricultural industry, from the moment in 1225 when King Henry III granted Henry de Rokeby, the Lord of the Manor, permission to hold a street market in the town centre.

Sheep Street, one of the town's oldest thoroughfares, became home to a bustling agricultural market, with farmers from Rugby's rural villages travelling into town to sell livestock and produce.

Rural Rugby features photographs and objects from the Museum's social history collection, including a 19th century man trap used by farmers to catch poachers, a dairy yoke which carried milk churns and pails on a farm in Stretton-on-Dunsmore in the 1850s, and a milkmaid's bonnet.

The exhibition also includes objects on loan from the Marton Museum of Country Bygones.

The museum's collection charts rural life from a century ago and includes agricultural and trade tools, domestic items and even typewriters.

The museum was the brainchild of Marton man George Tims, an avid collector whose passion for agricultural history led his collection to be housed in a dedicated museum which opened to the public in 1982 - three decades after its humble beginnings, stored in garden sheds.

Items on loan from the Museum of Country Bygones include a seed fiddle, dairy shoes and milk churns.

Cllr Heather Timms, Rugby Borough Council portfolio holder for growth and investment, said: "The borough has a number of thriving rural communities and Rural Rugby offers a fascinating glimpse of how times have changed, and how many farming traditions and practices endure to this day."

Photo caption: A livestock sale at Rugby Cattle Market, in Craven Road, in the 1980s.