A QUERN stone from the Iron Age discovered during an archaeological dig in Cawston has gone on display at Rugby Art Gallery and Museum. 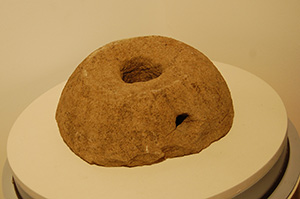 The stone, which was used to grind corn into flour, was unearthed six years ago by a team from Cotswold Archaeology on land in Cawston Lane.

The archaeologists discovered pits and ditches which suggest the site was home to an Iron Age settlement between the fifth and first centuries BC. Elsewhere on the site, the dig unearthed evidence of enclosures likely to date from Medieval times, when the site switched from a settlement to farm land.

But the prize discovery was a complete Iron Age quern stone. Querns ground corn into flour and consisted of an upper stone and a lower stone, between which the corn was ground.

The upper stone, 12 inches in diameter, has a hole in the middle into which the corn was poured and a smaller hole at the side in which a wooden peg was placed to allow the stones to rotate and grind.

The gallery includes artefacts discovered during excavations at the site of the Roman town of Tripontium on the outskirts of Rugby, together with pieces from the private collection of Matthew Bloxam, the Rugby-born antiquarian and amateur archaeologist.

Cllr Heather Timms, Rugby Borough Council portfolio holder for growth and investment, said: "When archaeologists discover the history buried beneath our feet it increases our understanding of Rugby's rich and varied history.

"The Archaeology Gallery houses a treasure trove of artefacts which give a fascinating glimpse into the borough's past."

The quern stone remains on display at the gallery until 28 July.