A COUNCIL Twitter campaign to promote Love Parks Week has made the shortlist for a national award. 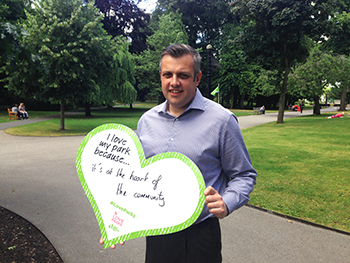 Residents were invited to write messages on special Love Parks Week heart-shaped boards, completing the sentence: "I love my park because....,".

Holding the message, the authors then posed for photographs which were posted on the council's Twitter accounts.

Messages included: "I love my park because...

In addition to residents, the leader of Rugby Borough Council, Cllr Michael Stokes, joined the celebration of the borough's parks and green spaces, together with Cllr Lisa Parker, the council portfolio holder for environment and public realm.

Now the Twitter campaign has been shortlisted for the Love Parks Award at the Keep Britain Tidy Network Awards. 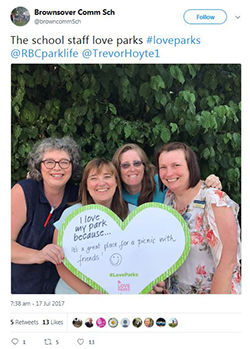 The award honours events and campaigns which promote Love Parks Week and its aim of encouraging residents to visit and enjoy parks across the country.

Cllr Parker said: "2017 was a memorable year for Rugby's parks and green spaces, with five Green Flag Awards and gold in the Heart of England in Bloom Awards.

"We know our residents enjoy Rugby's parks all year round but Love Parks Week gives us the chance to celebrate the important role our green spaces play in the lives of our communities, and I'm delighted our Twitter campaign has been shortlisted for a national award."