THE winners of this year's Rugby Open were revealed during Rugby Art Gallery and Museum's Festive Evening. 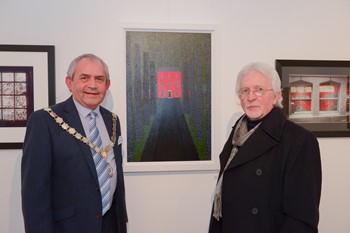 The annual celebration of artistic talent attracted nearly 300 entries, with 141 selected to feature in the Rugby Open exhibition.

Bryan Kelly was crowned the winner of this year's Open for his painting, The Red House.

Bryan, a member of Leamington Studio Artists, specialises in 'naive' paintings and takes inspiration from artists such as Van Gogh, Gaughin and Pissarro.

His prize included £1,000 and the opportunity to host an exhibition at Rugby Art Gallery and Museum's Floor One Gallery next year.

Other Open winners included Jane Tilley, who won the World Rugby Hall of Fame prize of £500 for her work, Meadow Life, and Frank Cook, who was awarded the Rugby branch of the Art Society's trophy and £50 for his piece, Canterbury Cathedral.

Philippa Powell was presented with the Rugby and District Art Society prize for her painting, Autumn Colours, and Eric Gaskell won the Picture Perfect award for his piece, Audlem Mill.

The final winners announced at Friday's (8 December) Festive Evening were Isabel Meeke, who won the Sue Byrne prize for her work, Embroidery Eye, and Chloe Bell, whose piece Complete Me won the Martin Valentine award.

The prizes were presented by the Deputy Mayor of Rugby, Cllr Tom Mahoney.

Visitors to Rugby Art Gallery and Museum can vote for the Rugby Open People's Choice Award until 31 December, with the winner announced before the exhibition closes on Saturday 13 January.

"I'd like to congratulate all the winners and encourage everyone to pay the exhibition a visit over the Christmas holiday."

Photo caption: The Deputy Mayor of Rugby, Cllr Tom Mahoney, and Bryan Kelly, winner of the Rugby Open 2017, with his piece, The Red House.