Cheap as chips for Mayor's charity

A BROWNSOVER chip shop celebrated its first anniversary under new ownership by raising cash for the Mayor of Rugby's charity. 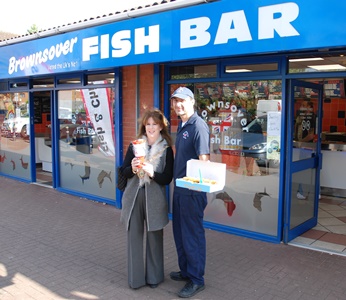 The Brownsover Fish Bar offered customers half price fish and chips on Tuesday 17 October, with all profits going to the Matt Hampson Foundation - Cllr Belinda Garcia's charity for her Mayoral year.

"I was delighted to help Vasilis and his team celebrate the first anniversary of running the Brownsover Fish Bar, and wanted to personally thank him for supporting such a worthy cause," Cllr Garcia said.

The Matt Hampson Foundation provides support, relief and treatment for anyone who has suffered serious injury or disability while participating in, or training for, sport activity.

For more information on how to support the Mayor of Rugby's charity, visit www.rugby.gov.uk/mayor