Perfect ten for Rugby at Heart of England in Bloom Awards

RUGBY struck gold for the tenth year in a row at the Heart of England in Bloom Awards. 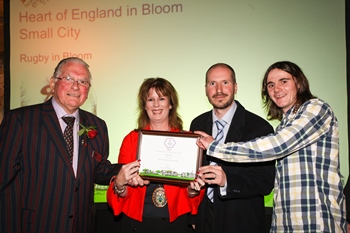 The Mayor of Rugby, Cllr Belinda Garcia, collected the gold award on behalf of the borough on Thursday (14 September) during a ceremony at Warwick Castle.

Judges toured the borough in July and praised the floral displays in Caldecott Park and hanging baskets throughout the town centre.

The judges welcomed the council's partnership with Warwickshire Wildlife Trust and volunteers to maintain the nature reserves at Swift Valley and Ashlawn Cutting, and the growing number of wildflower meadows across the borough.

Other highlights for the judges included the town's celebration of its heritage, with the World Rugby Hall of Fame singled out for praise, and visits to Brownsover Community School and Rugby School.

Cllr Lisa Parker, Rugby Borough Council portfolio holder for environment and public realm, said: "The Heart of England in Bloom judges said Rugby 'never fails to impress' and we're delighted to carry on our remarkable record of winning gold in the contest.

"In Bloom brings the whole community together, from businesses which sponsor floral displays to volunteers, schools, residents and community organisations.

"Together we help make Rugby a brighter, better places to live and I'd like to congratulate everyone who played a part in another golden year for the borough."