A COMPANY director who stopped a council community safety warden from entering a business premises where he was burning a tyre on a bonfire has been handed a £1,700 legal bill by magistrates. 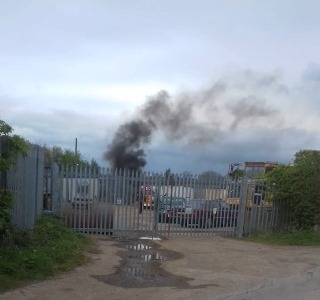 Rugby Borough Council received an anonymous tip-off from a member of the public on 24 April about a fire at a premises in Coal Pit Lane, Wolvey.

When a community safety warden arrived, thick plumes of black smoke were spotted billowing from the site and, on reaching the entrance, the warden spotted a bonfire containing a tyre and other waste.

The gate to the site was locked but the warden saw a man inside and asked him what was burning. The man claimed it was paper and other rubbish, and when challenged about the black smoke, he blamed the diesel he had poured on the fire to start it.

The warden then asked to enter the site to inspect the fire, but the man refused, claiming he did not own the premises. When questioned, the man gave his name as Chris Hansford and said the site was owned by the company Stoke Plant Hire, whose owner was a Brendan Doherty.

A subsequent investigation by the council's environmental health team revealed the site was purchased in 2009 by a James Joseph Doherty, of Rugby Road, Binley Woods.

In 2011 James and Brendan Doherty successfully applied for planning permission to demolish a bungalow on the site and construct a building for use as a plant maintenance depot.

When James Doherty attended an interview under caution with an environmental health officer, he was shown stills from body camera footage taken at the site by the community safety warden.

Doherty confirmed he was the man who had spoken to the warden on the day of the incident, and admitted to starting the fire and preventing the warden from accessing the site.

At Nuneaton's Warwickshire Justice Centre on Tuesday (5 September), Doherty pleaded guilty to two offences under the Clean Air Act 1993 - causing or permitting dark smoke to be emitted from an industrial or trade premises, and obstructing the community safety warden from exercising the power to enter the site.

The 44-year-old told magistrates he was ashamed to find himself in court and apologised to both the magistrates and the council.

Doherty was fined a total of £416 for both offences and was ordered to pay the council's costs of £1,279 and a victim surcharge of £36.

Speaking after the hearing, Cllr Lisa Parker, Rugby Borough Council portfolio holder for environment and public realm, said: "Burning tyres can release a number of poisonous chemicals into the atmosphere which present a genuine risk to the public.

"All businesses have a responsibility to both the environment and public safety, and the Clean Air Act sets out clear standards which the council has a duty to enforce."