Parks and Green Spaces Minister Marcus Jones chose Rugby’s award winning parks to announce that the Government will extend the Green Flag Award scheme for the next five years.

Rugby boasts not one but five Green Flag winning green spaces - which include Centenary Park, Gladstone Green Pocket Park, Millennium Green Pocket Park and Caldecott Park  - many of which were neglected sites that have been transformed by the hard work of the community and the local council.

For 20 years, the Green Flag Awards have been recognising the best of outdoors spaces in the UK, allowing visitors to easily find quality parks and other green spaces to enjoy and setting standards for park managers across the country.

Many parks have won the award, but winners also include more unusual spaces such as social housing developments, cemeteries, canals, and shopping centres.

The awards are run on behalf of the Government by Keep Britain Tidy, an environmental charity that campaigns for people’s right to live and work in a place of which they can be proud.

Parks and Green Spaces Minister Marcus Jones, who visited the borough on Wednesday (23 August), said: "Rugby is a clear winner when it comes to parks and there was nowhere better to confirm that the Green Flag Awards will be continuing, championing Britain’s excellent parks and green spaces and the people behind them.

"The awards are valuable not least because they reward local authorities and communities for their dedication to the great outdoors - and give locals and tourists an easy way to find quality spaces to get outside, exercise and play." 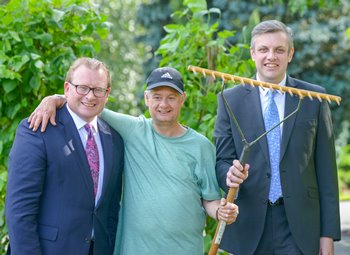 Centenary Park in Rugby is an example of a leading Green Flag park. The Minister met volunteers who had helped turn a neglected allotment into a space for the whole community.

The park now boasts a large play area, a games area, a green gym and nature area, including flowers to attract bees and butterflies, and has been protected as part of the Fields in Trust Centenary Fields programme.

The Newbold-on-Avon Community Partnership and Rugby Borough Council fought hard to secure over £215,000 to transform the neglected land. In addition to a well deserved Green Flag Award, Centenary Park was also named the most improved park by Fields in Trust in 2016 and received an award from the Department for Farming and Rural Affairs for providing an excellent home for bees and other insect life.

Another Rugby park benefitted from a share of DCLG’s £1.5 million to encourage urban communities to turn small, often derelict, pieces of land into ‘Pocket Parks’ for the benefit of all.

Rugby’s Gladstone Green Pocket Park received £10,000 and now contains a vegetable patch for neighbours and a picnic spot to enjoy the produce they’ve grown themselves. This is part of a wider plan to encourage the New Bilton community to grow their own food. Gladstone Green won a Green Flag Community Award in 2017, a special award created to celebrate the hard working volunteers behind the nation’s favourite green spaces.

These are just two examples of the almost 1,800 brilliant green spaces in the UK that have been awarded Green Flag status.

Allison Ogden-Newton, chief executive of Keep Britain Tidy,  said: "We welcome the extension to the Green Flag Award licence as we know how important the scheme has been in the renaissance of our parks over the past 20 years. We are delighted that the announcement is being made in Rugby as they have shown how people benefit from the provision of quality parks and green spaces in particular in encouraging people to live healthier and more active lives.” 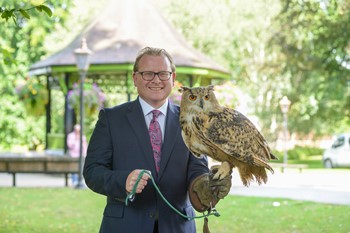 Parks and Green Spaces Minister Marcus Jones added: "My visit to Rugby demonstrated how parks and green spaces can breathe life into our towns and cities – contributing to the health and well being of the community.

"I am very much looking forward to outlining our future plans to support Britain’s parks in due course."

Cllr Michael Stokes, leader of Rugby Borough Council, said: “We’re rightly proud in Rugby of our track record in creating and maintaining quality parks and green spaces, and we were delighted to receive a record five Green Flag Awards earlier this summer.

“The Green Flag Awards set the benchmark which green spaces across the country aspire to reach, so it was a pleasure to welcome Marcus Jones MP to Rugby to announce the Government’s on-going commitment to the awards scheme.

“It was also an opportunity to show Marcus our award-winning sites and meet many of the volunteers and community organisations who devote so much time and effort to help us to provide Rugby’s communities with some of the best parks in the country.”