ENGLAND rugby legend Gill Burns visited the birthplace of the game this week to take a tour of the World Rugby Hall of Fame. 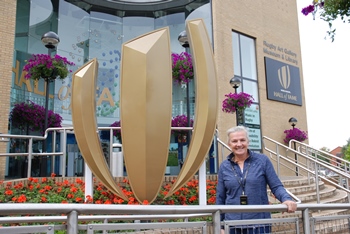 The World Cup winner, Hall of Fame inductee and former England captain visited Rugby on Monday with her proud parents, Ann and Ron.

Burns was one of the trailblazers of women's rugby, her exploits on the pitch matched by her efforts off it to establish the women's game.

A marauding number eight, she made her England debut in 1988 and six years later was a leading light in the Red Roses team which lifted the World Cup.

Burns played in four World Cups during an England career which spanned 14 years and saw her earn 73 caps.

Following her retirement from the international game, Burns served as president of the Women's Rugby Football Union for a decade from 2002 and also became the first female president of Waterloo Rugby Club, the team she represented throughout her club career.

In 2005 Burns was made an MBE for her services to rugby and in 2014 she became the 81st inductee to the World Rugby Hall of Fame.

Speaking after her visit, Gill said: "It's an amazing privilege to be included in the World Rugby Hall of Fame alongside such wonderful greats and it was an absolute pleasure to visit.

"It was a really informative experience with such friendly and helpful staff, and I look forward to returning and spending even more time looking around.

"I'd recommend a visit to the Hall of Fame to rugby fans around the world."

Burns was the latest Hall of Fame inductee to visit the birthplace of the game, following in the footsteps of rugby legends such as Martin Johnson, Jonny Wilkinson, Maggie Alphonsi, Keith Wood and Shane Williams.

Cllr Michael Stokes, leader of Rugby Borough Council, said: "The World Rugby Hall of Fame has welcomed visitors from all over the world since opening its doors and has helped Rugby build on its legacy as the birthplace of the game.

"It's always an honour when a Hall of Fame inductee pays us a visit and we were delighted to welcome Gill and her parents this week."

Bill Beaumont, chairman of World Rugby and Hall of Famer, said: "With a thrilling Women's Rugby World Cup 2017 now in full swing in Ireland and the attention of the rugby world currently on the latest stars of the women's game, it's important also to remember those who got us to this point.

"With her passion and talent for the game, Gill was a real trailblazer for women's rugby and an inspiration for a generation of English sportswomen.

"She was rightly inducted into the Hall of Fame in 2014 and it's great that she has taken the time out to visit our fantastic immersive exhibition in Rugby town."

For more information on the World Rugby Hall of Fame, visit www.therugbytown.co.uk/halloffame