COUNCILLOR Belinda Garcia has become the new Mayor of Rugby. 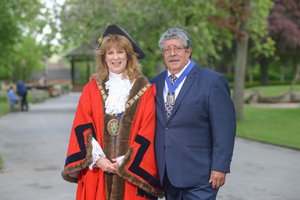 Cllr Garcia has lived in Rugby for 32 years and has represented the Revel and Binley Woods Ward on the borough council for the past five years.

She has chosen 'teamwork' as the theme of her year in office to highlight the importance of working together to achieve common goals.

Cllr Garcia has chosen to support the Matt Hampson Foundation during her Mayoral year.

The foundation was founded in 2010 and provides support and treatment for individuals who suffer serious injury or disability while participating in, or training for, sporting activities.

Cllr Garcia said: "I'm delighted to have the honour of being Mayor of Rugby and am looking forward to a busy year ahead.

"I have chosen 'teamwork' as the theme for my Mayoral year as I'm a firm believer we achieve far more by working together than alone.

"My charity for the year, the Matt Hampson Foundation, also has teamwork at the heart of its inspiring and important work, and I would be delighted to hear from residents, schools, community organisations or businesses who would like to support my fund-raising during the Mayoral year."

For more information on the Matt Hampson Foundation, visit www.matthampsonfoundation.org

Photo caption: The Mayor of Rugby, Cllr Belinda Garcia, and her husband Paco, the Mayor's Consort.