Mayor invites civic leaders on a tour of the town

CIVIC leaders from across Warwickshire and the West Midlands were invited on a tour of the town by the Mayor of Rugby. 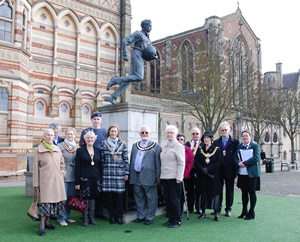 Cllr Sally Bragg welcomed the dignitaries at the Town Hall last Thursday (23 March) before the guests were taken on a guided tour.

The tour of the town centre included stops at The Close at Rugby School and the Webb Ellis Statue, and ended with a visit to Rugby Art Gallery and Museum, and the World Rugby Hall of Fame.

The visit was rounded off with refreshments at the Art Gallery and Museum, where Oliwia Dragon - a singer from one of the Mayor's charities, Rugby Area Talent Trust (RATT) - entertained the guests.

Cllr Bragg said: "I was delighted to welcome so many fellow mayors and council chairman to Rugby and help showcase the town's heritage with our Town Guides.

"It was also a wonderful opportunity to promote the World Rugby Hall of Fame, the Art Gallery and Museum, and one of my Mayoral charities, RATT.

"Oliwia sang a selection of beautiful songs and rounded off her performance with an apt rendition of Hall of Fame, by The Script."

For more information about guided tours of the town, call Rugby Visitor Centre on (01788) 533217 or email visitor.centre@rugby.gov.uk