Rugby in Bloom's ready for take off

THE 80th anniversary of the first successful test of Sir Frank Whittle's jet engine has inspired this year's theme for Rugby in Bloom. 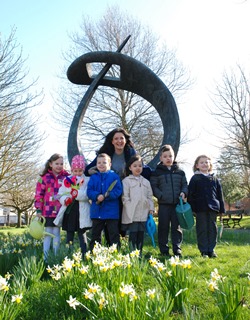 The annual contest encourages residents, schools and businesses to make Rugby blossom over the summer, and has become the highlight of the borough's horticultural calendar.

In addition, entrants who imaginatively interpret the Sir Frank Whittle anniversary theme have a chance of winning a special prize.

Application forms, and more information about this year's Rugby in Bloom, can be found at www.rugby.gov.uk/rugbyinbloom

All entries must be received by Monday 3 July.

Cllr Lisa Parker, Rugby Borough Council portfolio holder for environment and public realm, said: "Rugby won gold at both the Heart of England in Bloom and Britain in Bloom awards in 2016, and we're keen to raise the bar again this year to help make Rugby look its blooming best this summer.

"Rugby in Bloom brings our communities together and we look forward to receiving a bumper crop of entries."

Businesses interested in sponsoring floral displays for Rugby in Bloom can call the council's parks and grounds team on (01788) 533706 or email talkinthepark@rugby.gov.uk