Rugby flies the flag for the Commonwealth 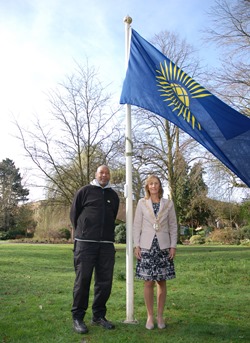 Rugby Borough Council joined forces with councils, charities and community organisations across the UK to take part in the Fly the Flag for the Commonwealth event.

The event encourages residents across the Commonwealth to celebrate its strength and success, and show support for the shared values of the 52 member countries - democracy, human rights and the rule of law.

The theme of this year's event was 'a peace building Commonwealth' and the Commonwealth flag was raised this morning in Caldecott Park, where the Mayor of Rugby, Cllr Sally Bragg, was joined by park ranger Trevor Hoyte.

A former international sprinter, Trevor represented England at the 1978 Commonwealth Games in Edmonton, Canada, where he made the final of the 200m.

The flag was later raised at the Town Hall.

Cllr Bragg said: "The theme for this year's Commonwealth Day reflects the shared determination of the whole Commonwealth membership to deliver enduring peace for all.

"Rugby has continued this flag flying tradition to mark the day, together with many towns and cities in the UK and across the globe."