A BLACK Country family visited Rugby this week to come face to face with history. 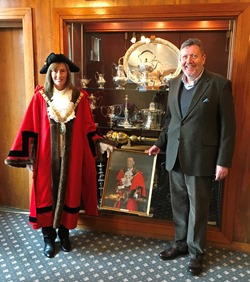 Tracing the family tree led Ian Dukes to the Town Hall on Monday, where his family was greeted by the Mayor of Rugby, Cllr Sally Bragg.

Ian, his wife Jane and daughter Eleanor were treated to a reception in the Mayor's parlour before taking a tour of the council chamber - where a portrait of Ian's grandfather, Arthur Joseph Dukes, hangs.

Arthur Dukes was appointed Mayor of Rugby in 1949 and was later made an Alderman of the borough.

The Dukes family were residents of Rugby from the 1860s to the 1960s, running a grocery and ironmongery business, Dukes & Son, on the corner of Sheep Street and a side street which was later christened with the family name - Dukes Jetty.

Following the visit to the Town Hall, the Dukeses paid a visit to the Wheeltapper, in Railway Terrace, where Ian's great-great-grandfather was landlord in the 1870s, when the pub was known as The Railway Inn.

Ian, from Kingswinford, said: "We were extremely grateful to the Mayor for the opportunity to tour the Town Hall and view my grandfather's portrait in the council chamber.

"We received a very warm welcome and it was wonderful to see the Mayoral robes which my grandfather wore, together with the ceremonial mace."

Cllr Bragg said: "Arthur Dukes played a leading role in Rugby's public life for many years, with the family name immortalised in the town centre at the former site of Dukes & Son.

"I was delighted to welcome Ian and his family to the Mayor's parlour and help him with his research into the family tree."