A SCULPTURE was unveiled in Caldecott Park to mark Holocaust Memorial Day. 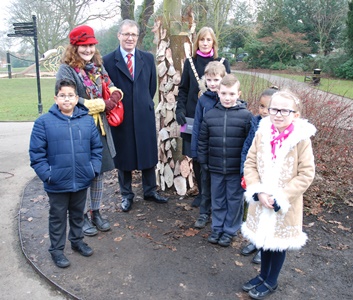 The sculpture, commissioned by the Holocaust Memorial Day Trust, was created by Rugby-based Works 4 Me and was inspired by the theme of this year's commemoration - 'How Can Life Go On?'

Works 4 Me collaborated with pupils from Northlands Primary School and members of community organisations to create the sculpture.

Everyday items including keys, rings and buttons were pressed into pieces of clay to represent the broken fragments of the lives lost during the Holocaust. Each piece of clay was then suspended from the sculpture's wire frame.

The sculpture was unveiled in Caldecott Park on Friday (27 January) during a Holocaust Memorial Day commemoration attended by the Mayor of Rugby, Cllr Sally Bragg, and Mark Pawsey, MP for Rugby.

Pupils from Northlands sang a song and read poems during the commemoration, which was also attended by Works 4 Me director, Kate Morris, and residents who contributed to the sculpture.

Cllr Bragg said: "It's fitting Works 4 Me brought different generations together to create this thought-provoking and striking sculpture to commemorate Holocaust Memorial Day.

"We have a duty to never forget the horrors of the Holocaust and  learn the lessons from history in order to create a better future."

The council's arts developments team supported Works 4 Me in delivering the project. A display charting the project's progress has now opened in the foyer at Rugby Art Gallery and Museum.

The sculpture remains on display in Caldecott Park for the next month.

Holocaust Memorial Day, an international day of commemoration first held in 2001, takes place on 27 January - the date Auschwitz was liberated in 1945.