A CHRISTMAS Service of Remembrance at Rainsbrook Cemetery and Crematorium raised £95 for the Oral Health Foundation. 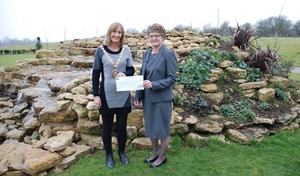 The remembrance service was held in early December and was attended by the Mayor of Rugby, Cllr Sally Bragg.

Following the service the congregation was invited to make contributions to a collection in aid of the Oral Health Foundation, one of the Mayor's charities, and the Farming Community Network, the chosen charity of the chair of Daventry District Council, Cllr Alan Chantler.

The collection totalled £190, with both charities receiving £95.

Cllr Bragg said: "The Service of Remembrance was a poignant time for reflection for all who attended and I'd like to thank everyone for their generous contributions to the collection."