A COUNTRY lane was closed for four days after fly-tippers dumped a large pile of rubble and rubbish - including piles of potentially deadly asbestos. 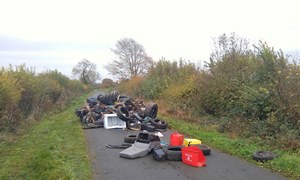 Specially trained contractors had to be hired to clear the fly-tip, which completely blocked Penn Lane, off the A5 near Wibtoft.

The incident was reported to the council last Monday (14 November) morning.

Officers from the council's environmental protection team visited the scene and identified large quantities of asbestos in the rubble - along with a number of tyres, an old car seat and a fridge.

The debris was consistent with a dismantled garage and its contents.

The asbestos was safely removed from the site on Wednesday (16 November), with the rest of the rubbish removed the following day - when the lane re-opened to traffic.

The council now faces a clean-up bill running into thousands of pounds, and has appealed for witnesses or anyone with information about the fly-tip to come forward.

Cllr Lisa Parker, Rugby Borough Council portfolio holder for environment and public realm, said: "This has the hallmarks of a commercial fly-tip carried out by someone happy to make an easy profit at the expense of the environment and the council taxpayer.

"The rural location may mean nobody witnessed the incident, but the debris could provide the vital clue for us to catch those responsible.

"It may be the case a householder paid somebody in good faith to remove the rubble, having been told the debris would be disposed of responsibly.

"However, in such a situation the law makes it clear the householder has a duty of care to check the person removing the waste has the necessary paper work to legally dispose of it.

"So if you know someone who recently had an old-fashioned garage demolished and removed from a property, please contact our environmental protection team and help the investigation."

Anyone with information about the incident can call the environmental protection team on (01788) 533857 or email ept@rugby.gov.uk

Residents can report fly-tipping by contacting the environmental protection team or filling in the online form at www.rugby.gov.uk/reportaproblem