Golden summer for Rugby at Heart of England in Bloom Awards

RUGBY struck gold for a ninth year in a row at the Heart of England in Bloom Awards. 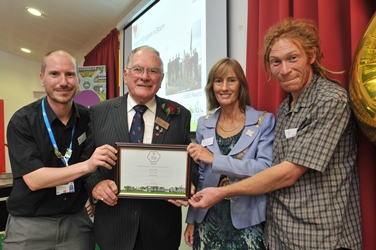 The Mayor of Rugby, Cllr Sally Bragg, collected the gold award on behalf of the borough during a ceremony at Walsall's Aldridge Parish Church Hall on Thursday (15 September).

The borough's entry for this year's contest promoted the theme of 'Enjoy Rugby' and also celebrated the Queen's 90th birthday, and the council's successful edible borders project.

The judges toured Rugby in July and were impressed by the number and diversity of community organisations which backed the borough's entry, and the support of schools and businesses in the town.

Other highlights noted by the judges included the council's conservation work, particularly with bees and hedgehogs, and the wide range of public art in the town.

The borough won gold in the small city category, and Cllr Lisa Parker, Rugby Borough Council portfolio holder for environment and public realm, said she was delighted this year's entry had secured the contest's highest accolade.

"Our success in the In Bloom contest relies on the support of the whole community and I'm delighted the judges noted both the number and diversity of the organisations which played a part in our entry," Cllr Parker added.

"Working together, we make Rugby a brighter, better place to live and I'm proud all of the hard work has been honoured with a gold award for a ninth year in a row."

Rugby represents the Heart of England at next month's national Britain in Bloom Awards, which take place at Birmingham's Edgbaston Stadium on 14 October.

The borough secured a place in the national final after winning overall gold at the 2015 Heart of England in Bloom Awards.