THE Syd Lawrence Orchestra celebrate the magic of the big band sound at the BENN Hall next month. 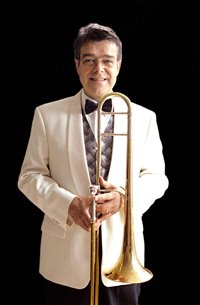 The orchestra has entertained audiences all over Europe for nearly half a century, performing a musical repertoire which ranges from the big band standards of Glenn Miller and Count Basie to the classic songs of Frank Sinatra and Ella Fitzgerald.

A serial winner of the Best Big Band in the Land title, the Syd Lawrence Orchestra formed in 1967 with a mission to keep the sound of big band swing alive.

The orchestra enjoyed a rapid rise to the top, selling out venues across the country and playing at London's top venues, including the Royal Albert Hall and the Royal Festival Hall.

When Lawrence retired 20 years ago, he passed the baton to Chris Dean, the orchestra's former lead trombonist.

Dean has remained faithful to Lawrence's original vision for the orchestra, introducing a new generation to the big band sound.

The Syd Lawrence Orchestra bring the Swing - The Ultimate Big Band show to the BENN Hall on Sunday 25 September.