Britain in Bloom judges take a tour of the borough

JUDGES from Britain in Bloom have been treated to a tour of the town. 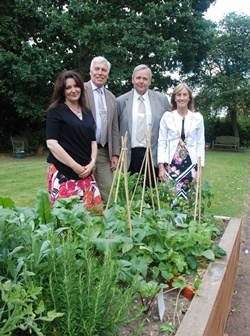 The judges visited Rugby on Thursday (4 August) and toured a host of the town's horticultural highlights, including the Green Flag Award-winning Caldecott Park and Centenary Park.

Rugby secured a prestigious place in the Britain in Bloom finals after taking overall gold at the Heart of England in Bloom Awards in 2015.

The borough's entry for this year's contest promoted the theme of 'Enjoy Rugby' and also celebrated the Queen's 90th birthday and the council's successful edible borders project.

In addition to visits to the town's flagship parks, the judges were taken to Brownsover Community School, where pupils have grown a variety of vegetables with help from Garden Organic volunteers, and toured the grounds of Rugby School.

The borough's innovative conservation work was also highlighted during the tour, including the council's partnership with Warwickshire Wildlife Trust and the British Hedgehog Preservation Society to make Rugby a haven for hedgehogs.

Volunteers at Butterfly Conservation Warwickshire told the judges about the creation of new butterfly habitats at Centenary Park, while the judges also visited the new bee hives at Rainsbrook Crematorium and sampled the first jar of honey harvested from the hives.

The tour ended at St Peter's and St John's Church, where volunteers laid on lunch for the judges with a menu packed with produce grown in the church's edible borders.

The lunch was attended by the Mayor of Rugby, Cllr Sally Bragg, Cllr Lisa Parker, Rugby Borough Council portfolio holder for the environment and public realm, and a number of volunteers who supported the borough's entry to Britain in Bloom.

Cllr Parker said: "We were delighted to welcome the Britain in Bloom judges to Rugby and showcase the borough looking at its best.

"Our entry was a real team effort, from the businesses who sponsored floral displays to the hundreds of volunteers whose dedication helps make Rugby a brighter, better place to live.

"Conservation and innovation were also key themes of our entry, with our work to create natural wildlife habitats for bees, butterflies and hedgehogs highlighted during the tour, together with our rapidly expanding edible borders project.

"But the over-riding theme was one of community spirit, and the judges could only have been impressed by the passion and pride of everyone who played a part in our Britain in Bloom bid."

The Royal Horticultural Society's Britain in Bloom campaign encourages communities to transform the environment through gardening.