Hundreds join in the fun on National Play Day

HUNDREDS of children descended on Whitehall Recreation Ground to join in the fun on National Play Day. 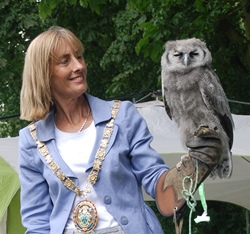 The celebration was organised by Rugby Borough Council's Play Rangers team, and included a host of fun and games to keep youngsters entertained.

Youngsters also had the chance to try out archery, boxing, cricket and football, and compete in a Space Hopper Grand National and foot pool.

Staff from Rugby Art Gallery and Museum joined in the fun by offering a range of arts and crafts activities.

The event was brought to a close by Icarus Falconry, who put on a display featuring a number of birds of prey, including a Hooded Vulture, Black Kite and a Milky Eagle Owl.

"I was delighted to attend this year's celebration and meet so many of the children who had turned out in force to have fun in the sun at the council's Whitehall Recreation Ground.

"It was also a pleasure to hear their good manners when asking for the complimentary sugar-free squash which went down so well given all the physical activities on offer."