A NEW exhibition revealing the heroic role played by Lady Dorothie Feilding in the First World War has secured £7,000 from the Heritage Lottery Fund (HLF). 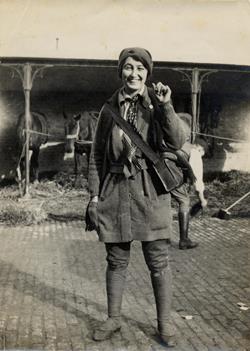 Lady Dorothie's War opens at Rugby Art Gallery and Museum in September, tracing the daughter of the Earl of Denbigh's journey from the family estate in Newnham Paddox, near Rugby, to the frontline in Flanders.

In 1914, just weeks short of her 25th birthday, Lady Dorothie travelled to France as a member of the Munro Ambulance Corps after completing her training at the Hospital of St Cross.

She was soon sent to Belgium, where she worked as an ambulance driver ferrying wounded soldiers from the frontline to clearing hospitals.

Witnessing death and destruction on a daily basis, Lady Dorothie's bravery was hailed by the French Admiral, Pierre-Alexis Ronarc'h, who published a special Order of the Day on New Year's Eve 1914 commending her "finest example of devotion and disregard for danger."

In 1915 she was awarded the French military honour of the Croix du Guerre and was made a Knight of the Order of Leopold II in Belgium.

A year later, Lady Dorothie became the first woman to be awarded the Military Medal by the British Army. In recommending her for the honour, a commander noted: "She has always displayed a devotion to duty and contempt of danger which has been a source of admiration to all."

Rugby Art Gallery and Museum celebrates her story in Lady Dorothie's War, an exhibition of photographs, letters, journals and mementos from her time on the frontline.

Education and events programmes run alongside the exhibition, including school workshops and a research project to discover the history of First World War nursing training at the Hospital of St Cross.

Cllr Heather Timms, Rugby Borough Council portfolio holder for growth and investment, said: "Rugby has held a number of events to mark the centenary of the First World War and I'm delighted the Heritage Lottery Fund has helped Rugby Art Gallery and Museum tell the inspiring story of Lady Dorothie Feilding on the 100th anniversary of the award of her Military Medal.

"The exhibition and supporting education and events programmes promise to give a fascinating insight into the heroic role a Rugby woman played in the First World War."

Rugby Art Gallery and Museum received the £7,000 grant through the HLF's First World War: then and now programme.

"Thanks to National Lottery players, the Lady Dorothie's War project will research and trace her experience supporting the troops on the Western Front, which will culminate in a series of interactive events and exhibitions for the community."

Photo caption: Lady Dorothie Feilding was the first woman to be awarded the Military Medal after serving on the frontline in Flanders during the First World War.