A RUGBY man faces a £5,000 legal bill after protected trees were damaged and felled in Clifton-upon-Dunsmore. 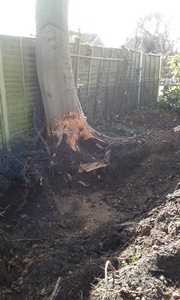 Dean Sayer had already secured planning permission to redevelop a bungalow in Main Street when, in September 2015, he submitted revised plans to Rugby Borough Council.

The revised plans included extending the proposed development to within metres of a number of trees in the property's grounds - all of which were protected under Clifton's status as a conservation area.

The council's arboricultural officer objected to the revised plans on the grounds the development posed a threat to a mature beech tree, and a planning officer advised Mr Sayer the objection was only likely to be overcome by revising the plans.

Sayer was also warned the beech was protected under Clifton's conservation area status and he risked prosecution if he failed to secure permission from the council before carrying out work to the tree.

But in February of this year Sayer contacted the council for advice after claiming the beech tree had been badly damaged by a contractor's digger which was excavating a tree stump at the property which had permission to be removed.

Sayer insisted the damage had been caused accidentally, as a result of the digger operator's vision being restricted due to a lack of space.

But when the council's arboricultural officer visited the property, he noted there was ample room for a digger to remove the stump without coming into contact with the beech tree, and the damage was consistent with a deliberate and repeated action.

While at the property, the officer also noticed another protected tree - a laburnum - had been felled without permission.

During a hearing on Tuesday (21 June), magistrates at Nuneaton's Warwickshire Justice Centre were told the damage to the beech tree was so severe it had to be removed.

In mitigation, Sayer's solicitor said her client's guilty pleas were on the basis he had not instructed the contractor to damage or remove the trees, and the damage caused to the beech had been accidental.

Speaking after the hearing, Cllr Lisa Parker, Rugby Borough Council portfolio holder for environment and public realm, said: "The council places a high value on the borough's trees and the stiff penalties imposed by magistrates in this case show the courts share our view.

"Even basic maintenance or pruning of a protected tree needs approval from the council, so it's vital residents contact us before carrying out work on a tree or risk facing an expensive day in court."

Photo caption: The damage caused to the beech tree at Dean Sayer's property in Main Street, Clifton-upon-Dunsmore, was so severe the tree had to be removed.