HUNDREDS of primary school pupils flocked to Caldecott Park for a special event to celebrate the Queen's 90th birthday. 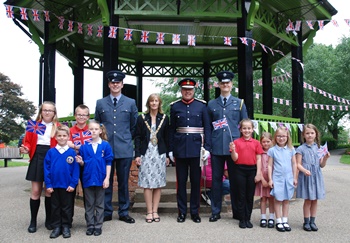 The Lord Lieutenant of Warwickshire, Timothy Cox, was guest of honour at today's (Wednesday) celebration, which was attended by pupils from Clifton, Northlands, St Oswald's and Rokeby primary schools.

Mr Cox, who was joined at Caldecott Park by the Mayor of Rugby, Cllr Sally Bragg, gave a short speech to the pupils about the Queen's long-service to the country and the importance of marking the milestone of her 90th birthday.

The pupils then sung the National Anthem followed by a chorus of Happy Birthday before enjoying an afternoon of traditional fun and games, including egg and spoon races, puppet shows, tea cup rides and a bouncy castle.

The celebration was organised by the council's park rangers.

Cllr Bragg said: "I was delighted to welcome the Lord Lieutenant of Warwickshire to Rugby to join the town's celebrations for the Queen's 90th birthday on such a warm and sunny day.

"The park was abuzz with children enjoying the activities.

"The Queen's birthday is a wonderful opportunity for our community to come together to honour Her Majesty's long and distinguished service to her country, and celebrate the spirit of togetherness which she has promoted throughout her reign."

Cllr Bragg visits Rugby's St Andrew's Church gardens at 11am on Friday (10 June) for a One Britain, One Nation celebration of the Queen's birthday, while on Sunday (12 June) she attends a street party in Albert Street to mark Her Majesty's milestone.