COUNCILLOR Sally Bragg has become the new Mayor of Rugby. 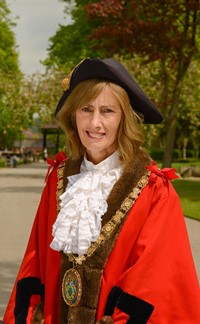 Cllr Bragg has lived in Church Lawford for 30 years and has represented Wolston and the Lawfords Ward on the borough council for a decade.

She has chosen oral hygiene as the theme for her year in office, inspired by her own health experiences and recent figures which revealed the rising number of children requiring teeth extraction under general anaesthetic.

To support her theme, Cllr Bragg has selected the Rugby-based Oral Health Foundation as one of her Mayoral charities.

The foundation, formerly the British Dental Health Foundation, was founded in 1971 and works to improve oral health and wellbeing around the world through education and campaigns such as National Smile Month and Mouth Cancer Action Month.

Cllr Bragg has chosen Rugby Area Talent Trust as her other Mayoral charity.

The trust, founded a year ago, aims to support young people in the borough who have a talent and passion for music, arts, academia, sport or entrepreneurism.

Cllr Bragg said: "It's a great honour to become the Mayor of Rugby and I'm looking forward to a busy year as the borough's first citizen.

"I'm also keen to take the opportunity to promote and support the work of my charities for the year, with both the Oral Health Foundation and Rugby Area Talent Trust being causes close to my heart.

"I'd be delighted to hear from residents, schools, community organisations or businesses who would like to support my fund-raising during the Mayoral year."

For more information about the Oral Health Foundation visit www.dentalhealth.org

More information about RATT can be found at www.ratt.org.uk